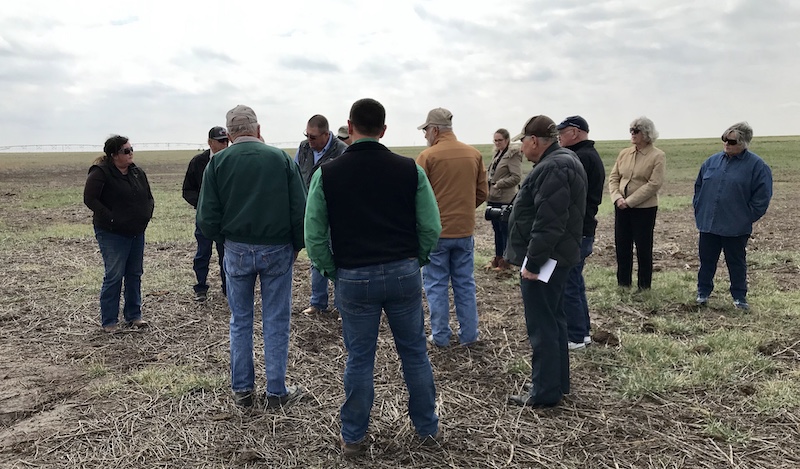 A cutting edge producer of organic crops and livestock who sees playas as vital recharge wetlands shared his thoughts on what must be done to protect playas and the water future of the region during a recent Playa Field Day in Hereford, Texas. Sponsors of the event included Ogallala Commons and its partners, the High Plains Underground Water Conservation District, the Dixon Water Foundation, and Texas Parks & Wildlife Department.

Dr. Chris Grotegut—a local veterinarian, farmer and stockman—told an audience of landowners, Master Naturalists, water district officials and students he is committed to “living within our water means” and likened playas on his farmland near Dawn to “a farmer’s best friend, a conduit to recharge of the Ogallala aquifer that makes life here sustainable.”

Dr. Grotegut related that most rainwater that falls in the Panhandle stays here. “When it rains, water flows downhill to playas and is absorbed. We can capture and store much of our limited rainfall in the soil and in the aquifer. We can build a long-term civilization here based on the renewable water that we have, we just have to think differently about how we do it. We have been a land of promoters, over-selling and not understanding what’s going on,” said Grotegut.

“Irrigation still has a place here—we don’t have a civilization without agriculture. But we have to have sustainable food production, and we are confronted with the problem of how to solve the challenge of declining water. Recharge to the Ogallala can run from zero in a drought year like 2011 to 3.5 inches of recharge per acre in big rainfall years.”

Grotegut attempts to keep irrigation on his family’s farmland in line with the rate of recharge.

“We came up with a hypothetical 1.5 inches of irrigation per land acre at our farm location to grow our crop. If we irrigate 10 to 12 percent of our land acres, or roughly 100 to 120 acres per 1,000 acres of land with 15 inches of water, that is enough water to make a reasonable irrigated corn, cotton, or wheat crop on 10 to 12 percent of the land. When we stay at 1.5 inches per land acre the depth to aquifer measurements have remained stable or have risen,” Grotegut explained.

To further test his theory, Grotegut irrigated with three-plus inches of water per land acre on 12 percent of his land and the aquifer level dropped substantially, from as little as 0.7 feet to 4.75 feet, just from doubling irrigation pumping for a short time. Those acres have since recovered following good rains. Well measurements were taken by High Plains Underground Water Conservation District staff through Grotegut’s participation in the Irrigation Water Assessment Program since 2014.

“We’ve learned that how we pump totally matters. Since 2014, pumping at the conservative 1.5 inches per acre rate, we’ve seen water levels in wells move up, some by as much as 10 feet. We can be our own best friend with how much we irrigate, or our own worst enemy. If we don’t save the water table we won’t save civilization here,” said Grotegut.

“We’ve also seen that where Ogallala wells recover the best from recharge is around our largest functioning playas. When rains are good and playas are holding water, the water table is steady. Suddenly, there is no devaluation of land values due to aquifer decline. The farmland holds its value because we’re not gutting the aquifer, and that’s good for us and our future,” he said.

He warned that where heavy pumping is using 2.5 to 10 times the recharge rate of the aquifer “it is guaranteed that the aquifer level will go to basically zero.”

He added, “Where we shoot for profitability and sustainability, the Ogallala is a wonderful bank to get us through drought times. In places that have good recharge, we view the Ogallala as a bank, and stored water as stored money. We had to get rid of temptation on our farm and sold a bunch of center pivot sprinklers. Today we have 23 left, and if it’s a wet spring we don’t irrigate.”

Grotegut maintains that if the intensive all-out irrigation culture of the Plains doesn’t change, there will not be many reasons for youth to stay in this region.

“We can’t fully irrigate all crop acres, and expect the water table to hold steady or regenerate. We don’t want to leave our grandkids dry holes. The best asset we can give is a culture of living within our limited means of recharge, and an awareness of how we get the water level in wells to go up. On our farm we have been going from intensive irrigation to limited intensive irrigation, and we’re moving to wheat, grass and cattle. We watch weather patterns more closely. We go harder in El Nino years when there’s rainfall to help us, and go less in La Nina years.

“I see us probably going from wearing ball caps back to wearing cowboy hats. We have to incorporate cattle and grass. Learning to live within a water balance can make a huge difference in our region,” he said.